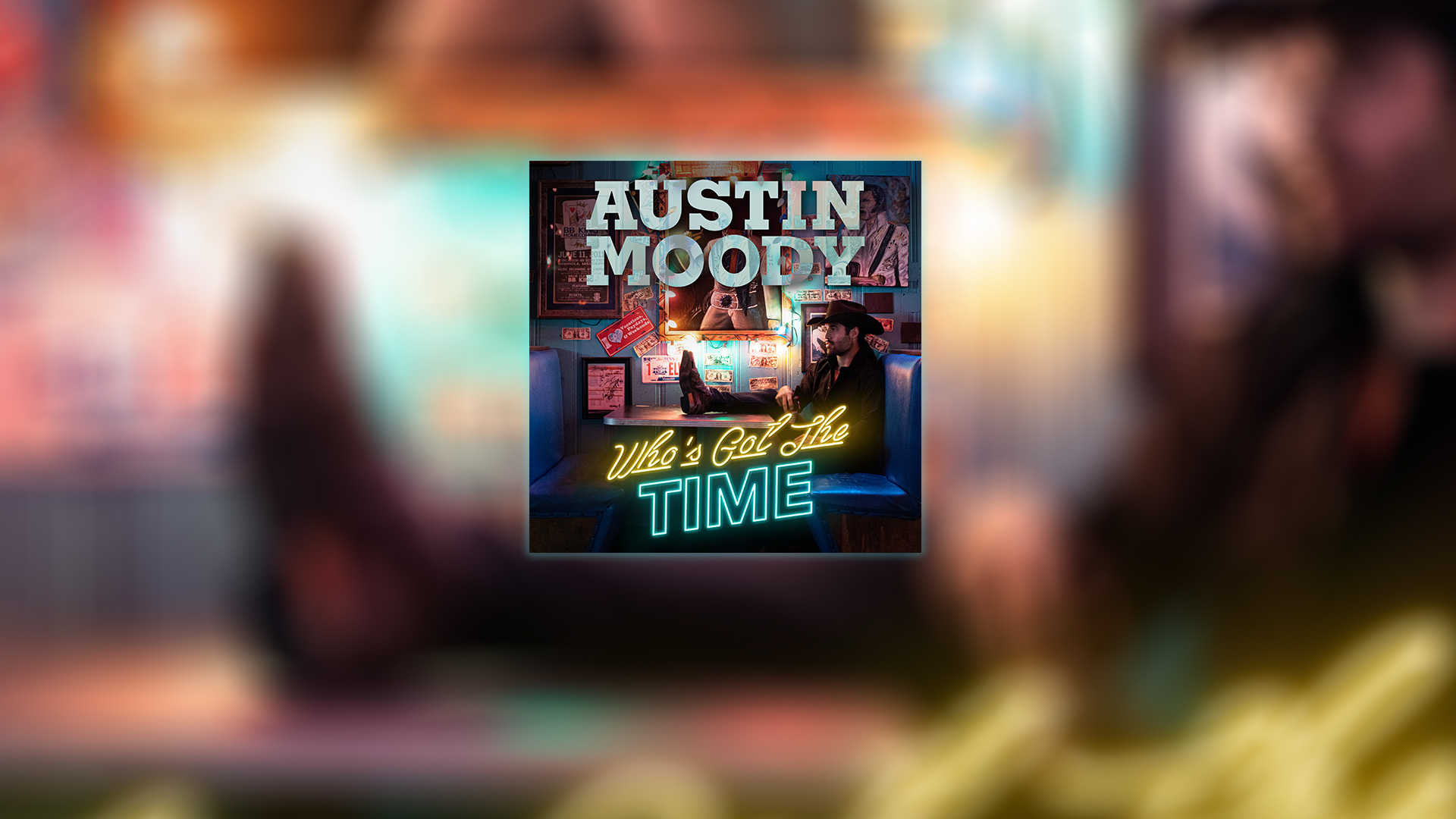 Who's Got The Time

The new single by Austin Moody

Even though Austin Moody was writing songs at 15, the musician from East Tennessee never thought he’d make his living chasing that dream. Already enrolled into the JROTC with a private pilot’s license under his belt, the young man who grew up on a family farm believed his future was in the Air Force.

Life, though, has a way of leading the ones meant to make music to Nashville. “When I came to town and got a publishing deal, it was everything I thought I wanted,” the relates Moody. “But it didn’t make me feel the way I thought it would.” Raised on both classic country and classic rock, Moody’s esthetic isn’t aligned to today’s country radio.

Even though Austin Moody was writing songs at 15, the bluegrass musician from East Tennessee never thought he’d make his living chasing that dream. Already enrolled into the JROTC, the young man who grew up on a family farm believed his future was in flying planes in the Air Force.

Life, though, has a way of leading the ones meant to make music to Nashville. And Music City’s business practices has a way of testing one’s love of music, turning people away from what they’re meant to do, before ultimately bringing them back – more resolved and committed to the songs they’ve written and music they’re supposed to make.

“When I came to Nashville and got a publishing deal, it was everything I thought I wanted,” the quiet musician says with a laugh. “But it didn’t make me feel the way I thought it would, and it didn’t really give me what I thought it was supposed to.”

Like so many talented young people, Moody fell in with people who knew more, but didn’t understand his vision. Raised on Alan Jackson, Don Williams, Johnny Cash, George Strait and Earl Scruggs, with a strong pull to the simple universality of Tom Petty and the Heartbreakers, Moody’s country isn’t aligned to today’s country radio… and that’s where the divergence sets in.

“I sang ‘Folsom Prison’ at my Grandmother’s funeral. It was her favorite, and all that fast stuff,” he explains. “Growing up in Roper boots, a John Deere belt buckle, my t-shirt tucked in my jeans, I was a farm kid, and there weren’t that many of us. But that doesn’t mean the music – even the country music – didn’t rock.”

Starting on banjo at 9, showing sheep and cattle through the county extension 4-H chapter, Moody took to playing music in local bands as a way to have fun. Going to see Marty Stuart & the Fabulous Superlatives at the Carter Fold with Charlie Tomlinson, a 70-year old friend and band leader, who tried to give Stuart a copy of Moody’s homemade CD after the show, it wasn’t long before a guitar was pulled out of Tomlinson’s truck – and the teenager was singing his songs for the Grammy-winning icon.

Trips to Nashville to write clouded the waters. The Air Force was left behind. Then, like so many kids with a headful of dreams, the waters clouded again – and Moody knew he needed to hit the road. Getting into the 1990 Ford F-250 pick-up he’d rebuilt after his dad left it to rust in a field, the deep-voiced singer headed west and south.

Mexico was his ultimate destination, but finding himself was the real goal. Along the way, he ran into a hippie couple from Washington State in a remote desert, and remembered the joy of music. As the trio made friends, hiked and played guitars, a voice came across the barren land – and a mystic-fellow they called “Odd Rodd” wandered up, saying he could sing you a song and tell you your life.

Odd as it was, the song he sang captured the essence of Moody’s conflict. It also showed him the way to turn and the things that mattered.

“Make the song in your heart, the song that you sing”

“I’m headed west hoping to be blessed But God I’m in the desert and you’re reminding me it’s all just a test. I left behind an old heart and an old mind I’m riding for love trying to find my own kind.”

Upon returning to Nashville, Moody recognized his trail was one he would have to cut himself. Severing his previous business connections, he continued playing touring on his own, building the base of fans who would ultimately fund Hollywood Horses.

Dreaming out loud with guitarist Justin Weaver, the pair believed there was a way to take the straightforward approach of the Heartbreakers and fuse it to the post-classic songwriting that was emerging from his collaborations with Tommy Conners, a veteran Texas writer. More Lone Star, more Laurel Canyon than mainstream country, the songs begged to be recorded with the spark of a live band.

Legendary producer Keith Stegall was attracted to the roots of Moody’s writing. Iconic songwriter/multiple CMA Musician of the Year Mac MacAnally responded to the honesty of the young 20-something’s writing. Together the pair agreed to go to Muscle Shoals to record with the core of Moody’s road band, plus Highway 101 lynchpin Cactus Moser on drums and session vet/Jeff King in the band.

Whether it’s the bar-room forward perspective-in-the-divisive world “Who’s Got The Time,” the ghostly shimmer of “Hollywood Horses,” the small town boy and big city girl soul stumble of “Lay It Down,” the redemptive benediction of “This Old Guitar” or the sweeping pledge of love “I’ll Be Back For More,” the dozen songs create a song cycle that suggests Willie Nelson’s Red Headed Stranger or Stuart’s The Pilgrim. More than a literal story, it is a series of postcards and snapshots from Moody’s coming into his own after love, loss, disappointment and fighting for his music.

By the time the phases and stages of reckoning and awakening have been passed through, Moody, who spent his Tuesday nights playing at a classic country jam at the cash-only, smoker friendly Betty’s in West Nashville, finds himself “Up In Luck.” It is a revelatory moment. Not just of survival or knowing one’s music is to be fought for, but realizing the strongest truth exists in its most organic form.

“I knew we needed players who would mesh into a whole,” Moody says of the unorthodox approach. “We were all in a room, watching each other, feeling these songs. I was singing with the band, knowing they’d respond in a deeper way as players to each other and to what was really driving these songs.”

Even the red dirt leaning towards the mainstream “Summer In Austin” suggests the intersection between Texas music, roots rock and what’s on the radio. A little nubbier perhaps than most sleek radio confections, it offers the same kind of conviction and transparency as Chris Stapleton while landing somewhere thinking young men all eventually end up.

Moody understands. The lanky guitarist who trained horses to pay his way while living in California remembers, “Keeping my Mom up at night,” during his wild child high school days, as well as his father’s stunned bewilderment when his son walked away from being an Air Force flier. That ability to let go even saw Moody almost relinquishing his pursuit of music.

“I got to where I was so fed up with all of it,” he marvels, “I didn’t care anymore. I didn’t come to Nashville to be famous, and the music means more to me than just being on the radio. It’s so easy to sell out, because there are so many opportunities to chase things that don’t matter. But that’s only if you don’t start with the people and the music in mind.

“See, I wanted to make music people could put themselves in, and see themselves living. Every one of these songs is something I’ve done or been through, so I know what happens – and I can save people some time, or just let them know they’re not the only one going through it. To me, playing hard and recording songs like this the way we did is what really matters. To me, that’s all there is.”

Well, that – and the faith of Mac McAnally, Keith Stegall, Odd Rodd, the old hippie couple, Mr. Tipton his high school English teacher, a road band whose stuck with him and the fans who keep turning up wherever he plays.

“I had to leave to find it, and I had to leave to record it,” Moody says. “But I never forgot my roots, or the music I was raised on. I’m a country artist. It’s who I am, and how I was raised. But it’s so much more than that: it’s what I do and it comes through in everything I sing.”

Who's Got The Time

To play the media you will need to update your browser to a recent version or update your Flash plugin.

Sign up and stay up to date with Austin Moody